Little G turned five this summer.  Five!!  She love, love, loves rainbows, so I thought what better way to celebrate her 5th birthday than by having a rainbow birthday party!  So I sat down with her and talked to her about her birthday party, and when I mentioned the idea of a rainbow theme, her face lit up with excitement.  At that moment, I knew it was a go.  I started brainstorming and scouring the internet for ideas, then got right to work.

First on the agenda:  rainbow party invites.  I decided to design these myself and was really happy with how they came out.  After a bit of hemming and hawing, I finally decided on the wording "Please join us for a rainbow of fun as we celebrate Gretchen's birthday!", the letters all being in rainbow colors, of course.  I initially had it with a white background, but it still seemed a little blah, so I added a blue sky background with a fluffy white cloud.  So that's the front: 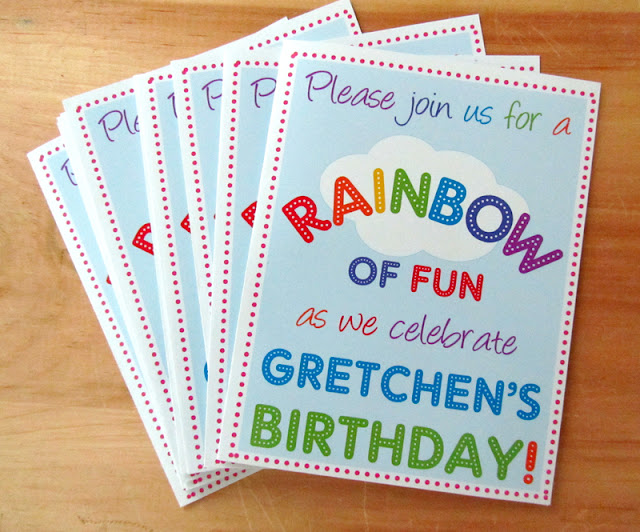 On the inside is a big colorful rainbow with all of the details of the party: 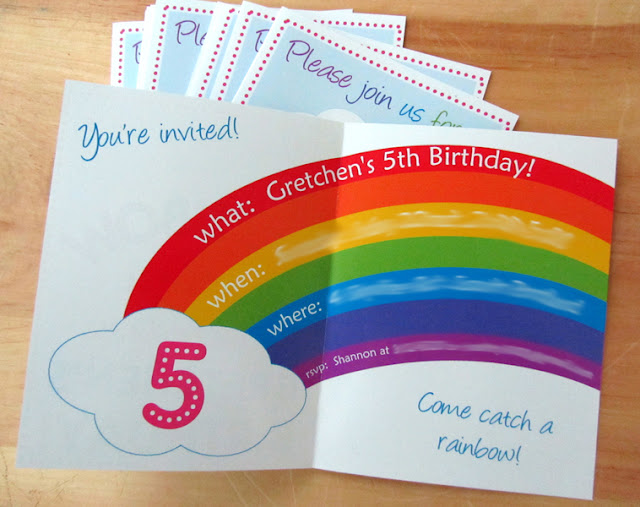 Next up: the rainbow party decorations.  I wanted to keep the decorations fairly simple and inexpensive, so we started out making some paper rainbows.  Very easy to do...all you need is some paper or card stock in all the rainbow colors, something to cut it with (I used a paper cutter so that my strips would be nice and straight), and a stapler. 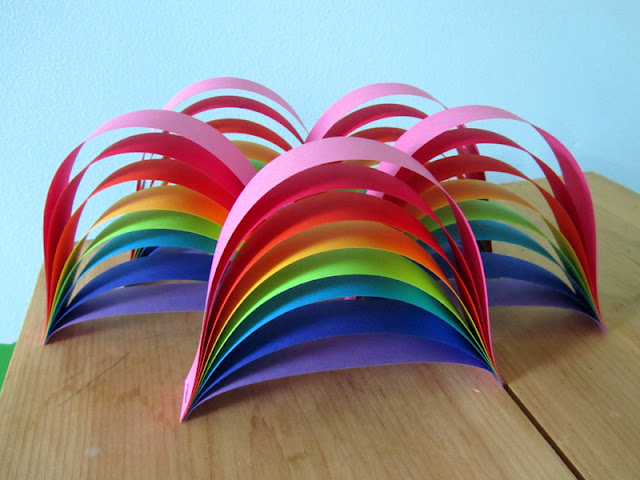 When we were making these, I was planning to stick with the traditional ROY G BIV color scheme, but G thought there should be pink in the rainbows, so we added that.  She also took a great interest in the color indigo...she was very intrigued by this new color that she had never heard of!

On party day, we ended up putting these on a table inside with the rainbow sticker books (more on this in a bit!) and some rainbow roses (yes, they are real, and yes, they are dyed): 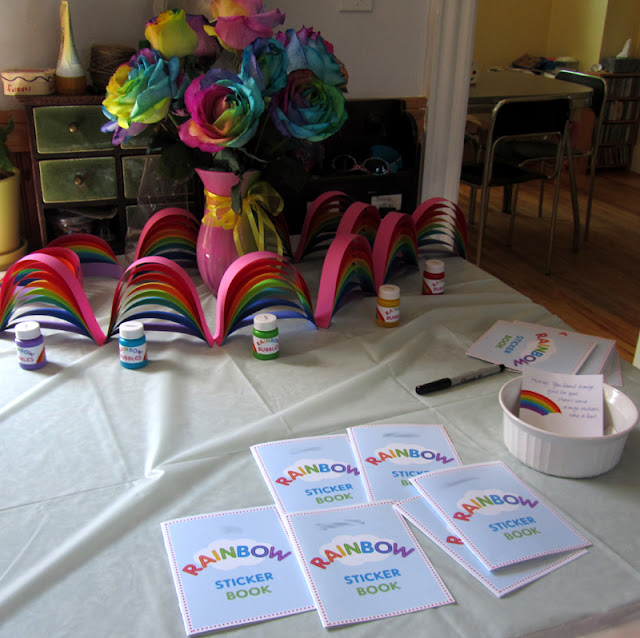 Crepe paper streamers are also an inexpensive and easy way to make a party feel festive.  Since this was a rainbow party, I picked up rolls in all of the rainbow colors (even indigo!!).  On party day, I hung a few streamers on the front porch so that our guests could easily spot the party house, then I hung them all along the ceiling creating a path from the front door, down the hall, to the kitchen, then split them so that half led to the back door (most of the party was in the back yard), and the other half led to the playroom (which, by the way, is not yet 100% done, but I did at least get the rainbow finished before the party...pics soon!!).  Here's a couple pics of the streamers: 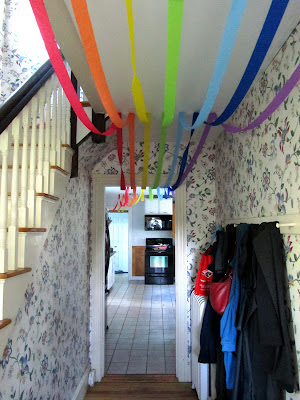 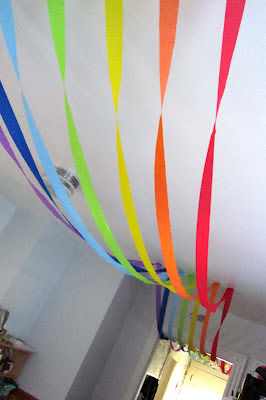 So that's the decorations.  Now for the rainbow party food!  If you've looked for rainbow party ideas on the internet, you will likely have come across all sorts of dyed food concoctions to make rainbow food.  But since all of the colors of the rainbow can be found in food naturally, I don't see the need to make all of these dyed rainbow food-like things.  I kept it simple with fruit skewers, a veggie tray, and bags of rainbow goldfish crackers (made with natural dyes...yay!).  Here's the food table: 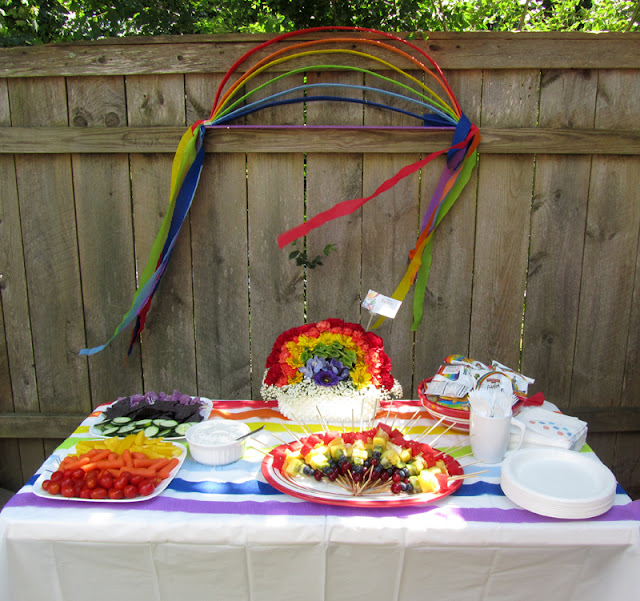 Ooooh, pretty!  I couldn't have been happier with house this turned out.  I really didn't have a plan ahead of time of how I was going to set the food table up, but I was thrilled when I saw in the forecast that the weather was going to be nice and we could have most of the party outside!  So I popped up a folding table, threw a cheap white table cloth on it, then ran more of those rainbow streamers (those big rolls of streamers really keep going and going!) across the top and down the sides.

Veggies were layed out in rainbow stripes:  grape tomatoes, baby carrots, yellow bell peppers, cucumbers, blue corn chips (closest I could get to a blue veggie!), and purple cauliflower, with bowl of ranch dip (kind of like a cloud!): 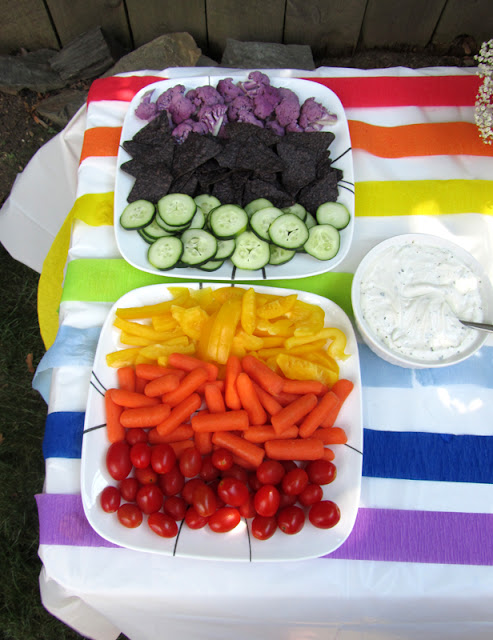 Rainbow fruit skewers with watermelon, oranges, pineapple, kiwi, blueberries, and grapes.  These were a big hit!  Almost all of them were eaten by the time the party ended: 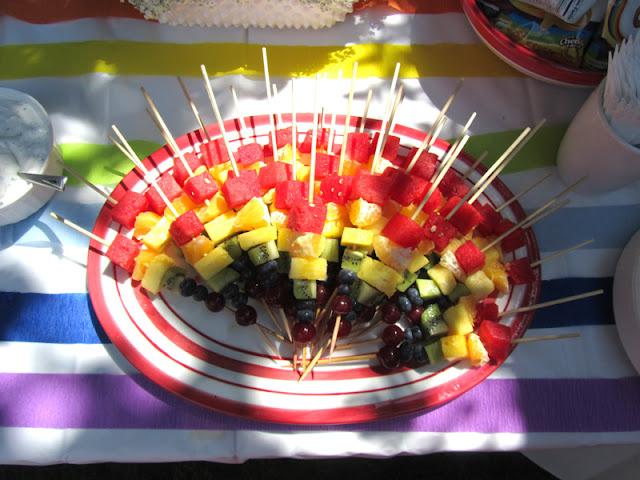 You may have noticed a rainbow at the back of the food table (no, not the one hanging on the fence...we'll get to that in a minute).  This one is a rainbow of flowers!  My mom knew we were having a rainbow party for G's birthday, and put in a special request with her favorite florist (that would be me!) for some rainbow flowers for the birthday girl.  So I came up with this: 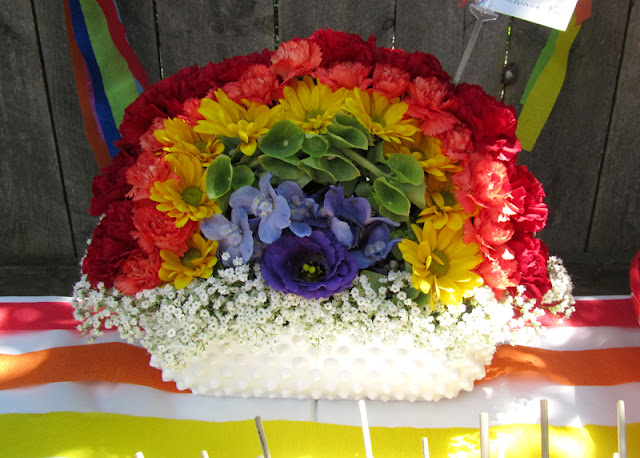 Birthday girl loved it, and our party guests did too!

So rainbow invites, rainbow decorations, rainbow food, rainbow flowers...how about some rainbow fun??  For birthday parties, I like to have at least one or two games or activities lined up...gives the kids something to do and makes it feel like a party.  With the rainbow theme, I thought a scavenger hunt would be perfect!  Since kids usually love stickers, I decided to go with a rainbow sticker scavenger hunt.  So I made sticker books for all of the kids, with a page for each color of the rainbow: 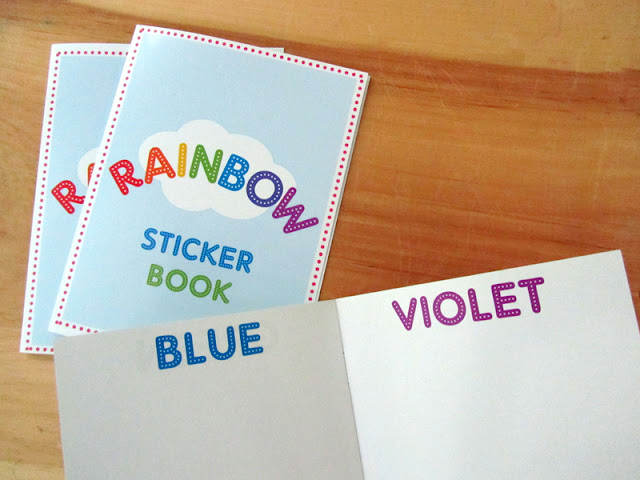 I got lucky and found some great deals on stickers in rainbow colors (thank you Target dollar spot and Christmas Tree Shops!), which I cut apart and divided into each color of the rainbow (except indigo, much to G's dismay).  Each color was put in a bowl with a little sign: 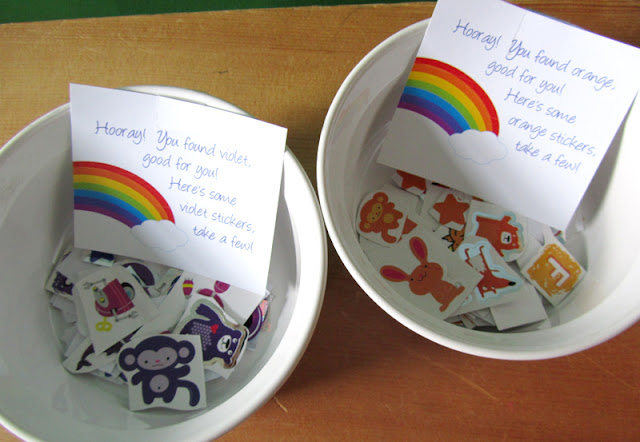 I hid these bowls of stickers all around the house.  Initially I was going to make up clues to lead from one color to the next, but decided to nix it due to time constraints and also the fact that it wasn't really necessary for this age group to have fun with the hunt.  The kids loved this, and every one of them found all of the colors!

Now for that other rainbow you saw hanging on the fence.  This one was for the Rainbow Limbo!  G was so excited about doing the Rainbow Limbo at her party.  I had planned to do something more elaborate for the rainbow (I had visions of clear tubing filled with colored water so the light would shine through the colors).  In the end, I went with something much simpler, but still totally effective.  And since I already had plenty of streamers in all the rainbow colors, I figured I may as well use those: 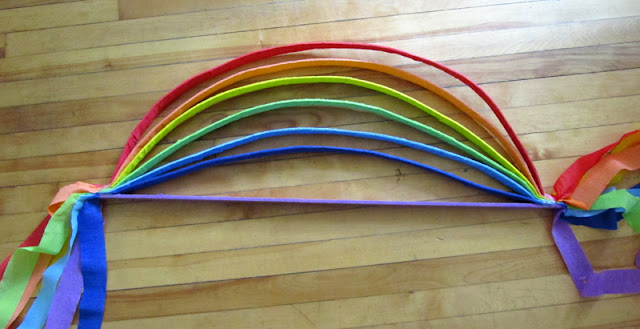 The kids had a blast doing this!  After we had gone from high to low, G wanted to go from low to high, so we went with it.  And after that, it seemed like the kids still wanted to play, so I figured why not milk it for all it's worth?  I gave the kids a series of things to do going under the Rainbow Limbo, like "hop on one foot", "tip toe", and "hop like a bunny".  Then I had G be the leader, and everyone had to follow her, copying her movements.  Fun stuff!! 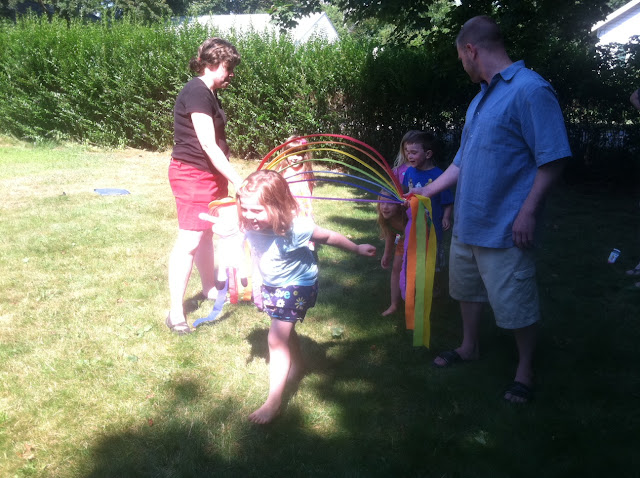 Now for the cake.  The rainbow cake.  I performed several experiments to make a rainbow layer cake with natural food dyes and got mixed results.  I thought I had all of the colors down, but I was a bit disappointed when baking the final cake that the orange layer did not turn out as it had previously, and the red/pink layer was not as vibrant as I had hoped.  But overall, you got the idea.  And not a drop of food coloring in it, so I can at least be proud of that! 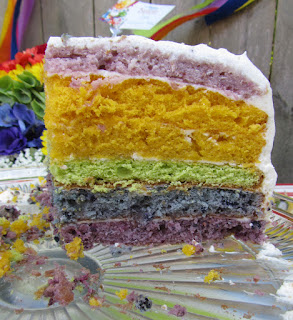 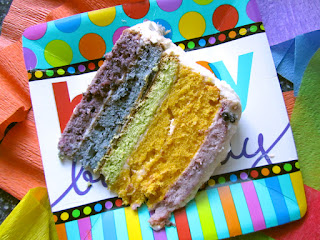 And now finally, the rainbow party favors.  I had so much fun with these!  G helped pick out the favors, and everything had to be rainbow, of course.  We packaged everything in cellophane bags, tied at the top with curling ribbon in rainbow colors, and attached a tag that said "rainbow to go!": 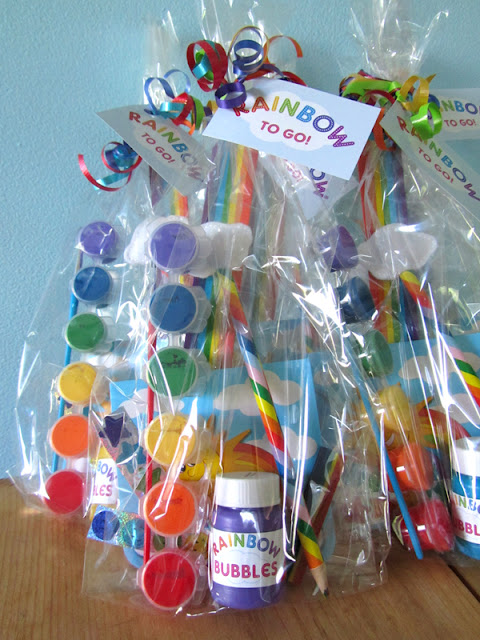 Here's a peek at all of the fun rainbow goodies inside the bags: 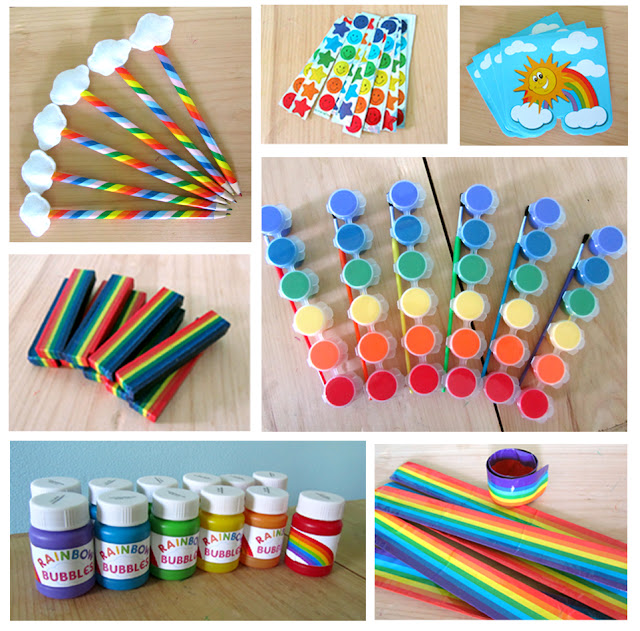 And that about sums up the Rainbow Birthday Party.  Yes, a lot of planning and effort went into it, but in the end when I asked G what her favorite part of the party was and she replied, "Everything!  The whole day!", it was all well worth it.  A smashing success!  Here's one last photo of the birthday girl with one of her rainbow roses (you can almost see her rainbow nail polish...) 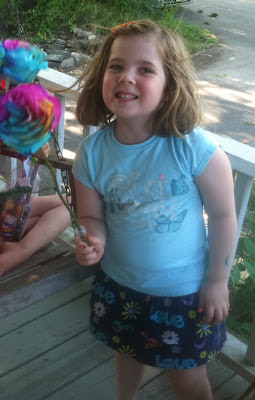